PLEASE NOTE: UNTIL FURTHER NOTICE THERE WILL BE RESTRICTED ATTENDANCE AT ALL TARA RACEWAY MEETINGS. ONLY LICENSED PARTICIPANTS WITH GREYHOUNDS ENGAGED, CATCHERS AND ESSENTIAL STAFF WILL BE PERMITTED ENTRY. NO TAB AND NO CATERING ON TRACK.

For Lewis Green, involved in greyhound racing for 30 years and one of a regular contingent of Victorian trainers at Tara Raceway’s weekly Thursday time-graded meetings, last week was his most successful day at a greyhound track.

Accompanied by Lisa Barrett and his grandson Jackson, the Parwan-based trainer brought up his 12th winner at the Mount Gambier track this year when landing a treble with Damo’s Pineapple, Alf Mulwee and Lucy Jetstream.

Lewis and Jackson Green and Lisa Barrett with Lucy Jetstream, the final leg of a treble at Tara Raceway last Thursday.

The winner is the first greyhound raced by the Warren Sidebottom-managed Tulla Johnnies Syndicate, Green saying the win was the first for the March 2016 fawn dog after a lengthy lay-off due to injury.

“Earlier this year he had spent four months on the sidelines and it had then taken him eight runs to get back among the winners. Actually, it had been six months since he had last won and that had been at Geelong.”

Damo’s Pineapple is a litter brother to handy Victorian chaser Undisputed, a winner of 11 races and close to $60,000 in stakemoney and a close-up third when an odds-on favourite at The Meadows last Saturday night.

Alf Mulwee, raced by the Green-managed four-member Love Guru Syndicate, never looked like being beaten in the Metal Worx Stake (400 m), leading all the way from box one to defeat Schiavone by three lengths in 23.63 seconds.

As far as Alf Mulwee – a giveaway greyhound from Tamworth early this year – was concerned it was a case of the son of Cosmic Rumble x Queen’s Boss bouncing back to form after his past three starts had disappointed connections.

Lucy Jetstream, another giveaway, came down from Tamworth with Alf Mulwee and gave Green his treble when chasing Maximum Lisa for much of the 400 metre journey in the Rock’s Retreat Stake before gaining a head win in 23.76 seconds.

Raced in the same interests as Alf Mulwee, the win was the daughter of El Grand Senor and Wentworth Park winner Lucy Lips’ first for Green who said Lucy Jetstream appeared to be coming good again.

“To be honest she had shown very little since her last win which was back in May over 340 metres at Tamworth,” he said. “Hopefully now that she’s found winning form again she might continue to race in a consistent manner.” 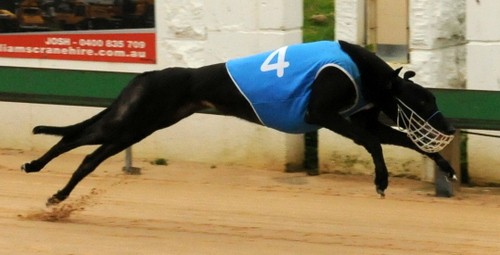 Wynonna Earp, the first leg of a double for Kath Brooks at Tara Raceway last Thursday.

Meanwhile, no one was more surprised last Thursday than Doug Blake, handler for Rupanyup trainer Kath Brooks, when Wynonna Earp jumped straight to the front in the Gambier Vets Stake (400 m) and careered away to an 8¾ length win in 23.65 seconds.

“Look, her form since her last win at the end of June had been pretty ordinary. In fact, so ordinary that last month I took her to Healesville for a couple of runs up the straight. She never looked like winning there but maybe the change of venue helped to turn her form around,” he said.