A win for code-switch syndicate

As Lewiston trainer Kevin Bewley tells it, Robert Brown’s five-member BG Punters Syndicate had been having a pretty lean run with their harness racing horses so they decided to diversify and give the greyhounds a go. 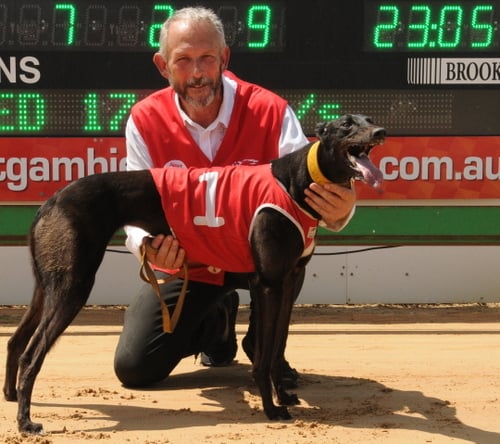 Kevin Bewley with Night Glow, the first winner for the BG Punters Syndicate.

“When they approached me they still had a few bob to spend but I suggested we could probably get something a lot cheaper than what they were talking and still have a bit of fun,” Bewley said.

“In the end I was able to pick up a lightly-raced little bitch called Night Glow, a nicely-bred daughter of Barcia Bale and Full Noise Turbo, that had won a couple of races over 390 metres at Ballarat.”

Night Glow actually had her first start for the syndicate at Tara Raceway back in early December when she ran third behind Turn To Fab before winning at Angle Park over 388 metres a couple of weeks later.

The black bitch was back at Tara Raceway on Thursday, and obviously better for having had a look at the track when leading all the way from box one over 400 metres, defeating Fried White Bait by three lengths in a best of day 23.05 seconds.

Syndicate members now have two dogs with Bewley, last month adding to their team after the purchase of Lumen Nation, a winner of three races on Victorian tracks, and racing at Murray Bridge tomorrow night.