PLEASE NOTE: UNTIL FURTHER NOTICE THERE WILL BE RESTRICTED ATTENDANCE AT ALL TARA RACEWAY MEETINGS. ONLY LICENSED PARTICIPANTS WITH GREYHOUNDS ENGAGED, CATCHERS AND ESSENTIAL STAFF WILL BE PERMITTED ENTRY. NO TAB AND NO CATERING ON TRACK.

In the end, it was a couple of former Adelaide-based litter sisters that gave Allendale East greyhound trainer David Peckham his first 100 winners in a year at Tara Raceway last Sunday.

First, it was Walk On Water, chasing her first win at the local track, that led all the way in the O’Brien Electrical Stake (400 metres) to give her trainer 99 winners. 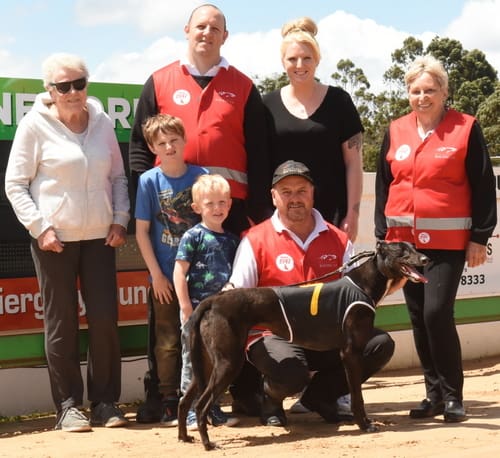 Trainer David Peckham with Right Above It, his 100th winner at Tara Raceway this year. Also pictured are regular helpers Connie Miller (left), Jason Newman, Melissa Freitag and Christine Yourgules, along with young Zayden and Chase.

Then, three races later, Right Above It led all the way in the South Eastern Hotel Stake (400 m), Peckham the third trainer at Tara Raceway to land 100 winners after Nicole Stanley and Tracie Price.

In Peckham’s kennels since September, Walk On Water and Right Above It are owned in Adelaide by Dwayne Jiggins and Neil Rawlings, who purchased the daughters of Banjo Boy and Princess Coco as pups.

Jiggins, formerly involved in harness racing, first became associated with the local trainer early this year when he was looking for someone to train the strong-finishing Dyna Naitch who has since won eight races at Tara Raceway.

Peckham is the first to concede that good owners certainly help to make good trainers, as do the people around you.

“Not only have Dwayne and Neil become involved down here but also Adelaide’s leading owners Tim Aloisi and Matt Lehman who have had great success with Azalea Monelli, a winner of nine races at Tara Raceway this year.

“And Ross Schurgott, involved with the kennels for 10 years through the Viking Syndicate, is now running the Nineofus Syndicate, an offshoot of the original. A win earlier in the year with Flash Jackie in the inaugural Tara Trackstar was a big thrill for them.

“Also coming on board this year was well known local identity Kevin “KD” Douglas who is having a bit of fun with Missing Mate and is looking to become further involved with some young stock.”

Peckham first became involved in the sport 31 years ago when he was 13, his father Allen, a former jockey turned greyhound trainer, enjoying plenty of success and winning three premierships at the Glenburnie track.

Peckham jnr also won the 1992-1993 Owner-Trainer premiership at the original greyhound track prior to three Leading Trainer awards at Tara Raceway in 2012 (which coincided with the introduction of TAB racing for greyhounds in Mount Gambier), 2013 and 2014.

Contributing to his 100 winners – well actually 101 after Cruising By won later in the day – were 20 doubles, seven trebles, four winners on five occasions and five winners once.

Highlight-wise, throw in for good measure a 600 metre track record of 34.79 seconds run by Pirate’s Curse on April 21.

Peckham took over his father’s Allendale East property 18 years ago although it wasn’t until June 2018 that he decided to train greyhounds on a full-time basis.

“It was a big decision but I thought with Tara Raceway racing twice a week it was a case of now or never,” he said.

“Besides, with supportive owners, some of whom are also looking to become involved in breeding, which in turn will see a need for some of the offspring to be reared locally, I reckon there’s a lot to look forward to.” 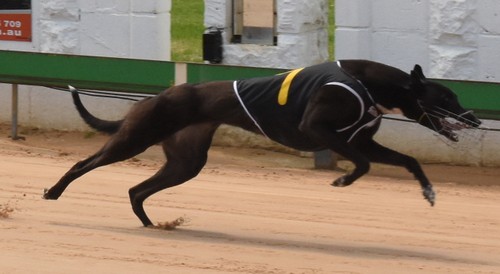 Right Above It will contest heat one of the Newman McDonnell Memorial at Tara Raceway on Sunday.

Later on Sunday, Peckham placed $100 on the bar – for the benefit of patrons and helpers. “A hundred bucks for a hundred wins,” he said.

Now, that was a nice gesture.

Meanwhile, two heats of the time-honoured Newman McDonnell Memorial (512 m) will be run on Sunday, Peckham represented by Right Above It who will jump from box two in the first heat.

He has winning form in the memorial, first run in 1986, Bourne Again successful in 2013 when defeating Cool Tappin’ and Colville before backing up again the following year with a win over Who’s Doing What and the Peckham-trained Thanks Tubby who at the time held the 512 metre record at 29.60 seconds.

Banjo Lass, who defeated Shae’s Magic and Brinza in last year’s memorial for Compton trainer Tracie Price, will line up from box seven in the first heat on Sunday, the black bitch sure to be improved by last week’s third-placing over 512 metres – her first run over the distance in more than three months.